Coloring is not just for kids

I watched an interview on The Huffington Post about the positive effects coloring can have on adults and my interest was peaked. I thought I would give it a try, it couldn’t hurt right? Turns out I enjoyed it more than I thought. I would put on my favorite album grab a cup of coffee and color for 30 minutes. It was not only relaxing, but it allowed me some down time to just take a deep breath, slow down and be in the moment.

I just wrapped “Mango’s with nostalgic flavor” written and directed by Asma Bseiso. Asma was selected to be part of this amazing project that Film Independent created and partnered with the U.S. Department of State to Launch Global Media Makers. Here is a little about how the project came to be,

“Having long recognized the importance of fostering a cross-cultural dialogue rooted in filmmaking, Film Independent is thrilled to announce the launch of Global Media Makers—an innovative new international film exchange program presented in partnership with the U.S. Department of State.

We were able to work with Asma who came over from Jordan for the project and her mentor Jeremy Podeswa (director of Game of Thrones, The Newsroom, Boardwalk Empire) to create a powerful short film ”Mango’s with nostalgic flavor”

I had an amazing trip to Portland! Not only was I able to take a trip home as a native Oregonian and catch up with my childhood friends, but I also got 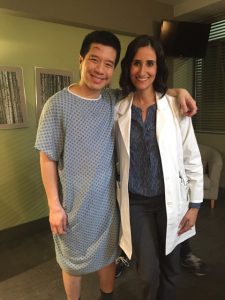 to play a doctor on NBC’s Grimm. The cast and crew were welcoming and fun from the moment I arrived, I even had three friends from high school that work on the crew, I did not want the day to end. If you missed the episode you can watch the clip Here: imdb.me/sarahsiadat

What a fun day on set, it was my first shoot where the star of the day was a hamburger referred to as the  “hero sandwich” and it was no joke, I don’t even eat burgers and it looked amazing. The food preparation for this commercial was it’s own art form. You better believe that those buns  glistened.. hamburger buns that is.

As a hand model nail polish and jewelry are generally what a wardrobe fitting consists of, but not for McDonalds. I was in FULL uniform all the way to the hat and the apron, my sole responsibility was to bring the tray carrying the precious cargo to the customer with a steady confidant hand. The shoot went great, the director kept saying, “you’re doing great, just make sure you don’t trip” He had a sick sense of humor.

As an actor telling people I’m also a hand model may be one of the most entertaining parts of meeting them. The reactions are always the same, “can I see your hands” as I reach my hands out for them to examine I can’t help but crack up as they proceed to check out my hands as if they are not actually part of me. All I can say is, I had nothing to do with their castabiltiy, but thanks mom and dad for passing along some employable hands.

Keep an eye out this winter for the hands the bring in the burger for McDonalds.

I blinked, and just like that Zaydin is off to Kin

Fun Fact: Did you know that the perfectly polished

Me wearing a sequins top for no reason and looking

Me and my sweet bunnies 🐰🐰🐰yes that inclu

Acting has literally taken me around the world. I’ve been able to work in Oregon, New York, Minneapolis, Dubai, and it ultimately landed me in Los Angeles. I studied and worked as an actress for 9 years in New York and after years of performing on stage I wanted a change. I jumped into an on-camera class and to my surprise I discovered my true calling as an actress was story telling in front of the camera.
Copyright All Rights Reserved © 2020
Contact Us

We're not around right now. But you can send us an email and we'll get back to you, asap.